How to Cook Bacon in the Microwave

I cook bacon quite frequently for my family.  Since we are a busy family with little ones, I am always trying to find the quickest and easiest method for making things that creates the least mess!  I quit making bacon on the stove top quite a while ago just due to the mess, and what I discovered was that you can get bacon every bit as good with way less clean up using other methods.

My go to method for a long time has been making bacon in the oven.  You can see all of my tips on how to cook bacon in the oven here.  But sometimes when I just need a few slices, or I need bacon fast I cook it in the microwave.  I grew up with my parents making it this way, and have gotten away from it in the past few years.

I decided that I was going to do a little experiment and see how cooking bacon int the microwave compared to cooking it with other methods.  Once I started looking into it more I found that there are SO MANY gadgets out there for cooking bacon in the microwave!  I had no idea!

So armed with the knowledge I had, and an Amazon cart full of gadgets to try, I spent a day making bacon (there are worse ways to spend your time, ha!) and got to the bottom of the best ways to microwave bacon.  How to make it crispy.  How much to make.  How long to cook bacon in the microwave.  And which microwave bacon cooker is the best.

Of course these are all only me and my team’s opinion, but hopefully it will save you some time and get you of to a great start making your own bacon in the microwave.

If you have some tips or methods I missed for making bacon in the microwave, please leave them in the comments below so I can try it out!  Thanks for the help!

Pros & Cons of Cooking Bacon in the Microwave

Every cooking method has pro’s and cons, but in general here are the things that we really liked about using the microwave to cook bacon:

Here are a few downsides to cooking bacon in the microwave:

How Long to Cook Bacon in the Microwave

We tested 4 different methods to cooking bacon in the microwave and each varied a bit.  On average we cooked the bacon 6-7 minutes in my 1000 watt microwave to get a nice crispy result.  I will tell you the exact method and time we used in each section below.

How to Microwave Bacon on a Plate

The great thing about cooking bacon in the microwave is that you don’t HAVE to have any special equipment.  There are some perks to it I will go over below, but if you have a microwave safe plate and some paper towels, you have everything you need to get cooking.

Here is method we used to cook the bacon in the microwave:

Note: Be careful handling because the bacon is very hot when it comes out of the microwave and the grease can burn you!

In the end we cooked six slices of bacon and it took us 7 minutes to cook them to consistently crispy in my 1000 watt microwave.

Thoughts on microwaving bacon on a plate:

How to Cook Bacon with a Microwave Bacon Cooker

Bacon cookers are not necessary to cook bacon in the microwave, however, they can make it easier to cook more, less messy, or provide a way to help them cook more evenly.

We tried out 3 of the most popular styles of microwave bacon cookers to let you know our thoughts.  I bought each of these on Amazon myself, so there is no bias here, just our experiences with how they worked for use when we tested them.

The first bacon cooker we tested was The Original Bacon Wave

.  It is under $10 and over all worked really well. Here is the run down on how it work.

How to Microwave bacon with the Original Bacon Wave

Here are what we thought the pros and cons were to this model.

Overall if you want to cook a lot of bacon in the microwave at one time, if you are looking for something to make bacon that stays flat, or if you want to keep it from cooking in the grease, this could be a good option for you.

The second bacon cooker we tried was the Presto Power Crisp

.  Spoiler alert!  This one turned out to be our favorite!  It seemed to have the best combination of hitting the mark on the things we thought were most important.  First let’s go through how this bacon cooker is used.

How to Microwave bacon with the Presto Power Crisp

Here are what we thought were the pro’s and con’s of the Power Crisp.

Overall we loved how evenly the bacon cooked, how quickly it cooked, the amount we were able to cook and the fact that the grease drained so well.  Those things made this our top pick for Microwave Bacon Cooker!

.  The Bacon grill is a tray that has some grooves in it to ideally draw the grease away from the bacon and a vented cover to reduce the mess.  This guy got the job done, and all in all seemed very similar to the method of just using a plate with paper towels.  Here is the method we used on this one.

How to Microwave bacon with the Bacon Tray

Here are the ups and downs of using the tray method to cook bacon in the microwave:

Overall, we think you are better off just using a plate than this guy because it will cook about the same, but you have less clean up on a plate.  If you do choose this one, at least the cover is handy and it stores easily!

How to Store Cooked Bacon

Once your bacon is cooked, it is time to eat!  If you have leftovers you have a couple of options.  You can store it in an airtight container or zip top bag,

How to Reheat Bacon in the Microwave

The great thing about bacon is that it reheats wonderfully, so you can pop out a slice or two and just put it on a paper towel in the microwave for 30 sec-1 minute and you have piping hot and crispy bacon just like fresh!

That was a whole lot of information. I hope you found something helpful!  If you have another favorite method for cooking bacon in the microwave, make sure to let me know in the comments so I can give it a try! Or if you try out one of these methods, let me know how it goes for you! 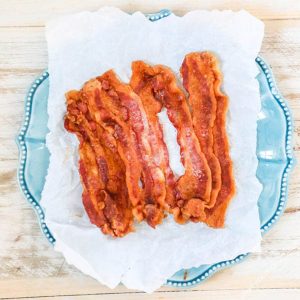 How to Cook Bacon in the Microwave

Cooking bacon in the microwave is a quick and easy way to prepare perfectly crispy bacon.  You can serve it with breakfast, add it to soups, salads and sandwiches, or just munch on it plain! This method uses just a microwave safe plate and some paper towels, but there are many other bacon cookers that do a great job too.

In the end we cooked six slices of bacon and it took us 7 minutes to cook them to consistently crispy in my 1000 watt microwave.

Note: Be careful handling because the bacon is very hot when it comes out of the microwave and the grease can burn you!

* Percent Daily Values are based on a 2,000 calorie diet. Your daily values may be higher or lower depending on your calorie needs. 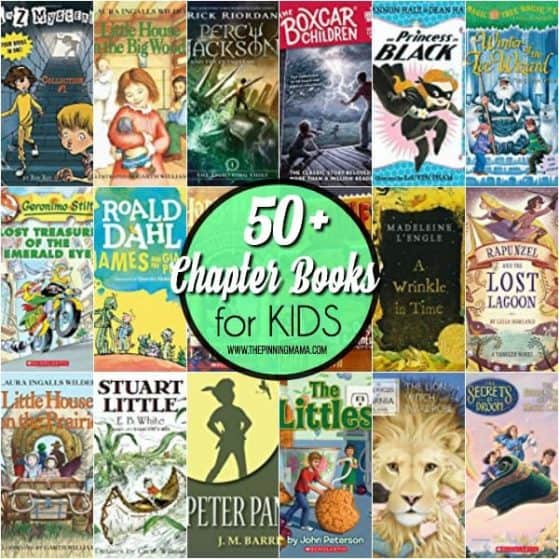 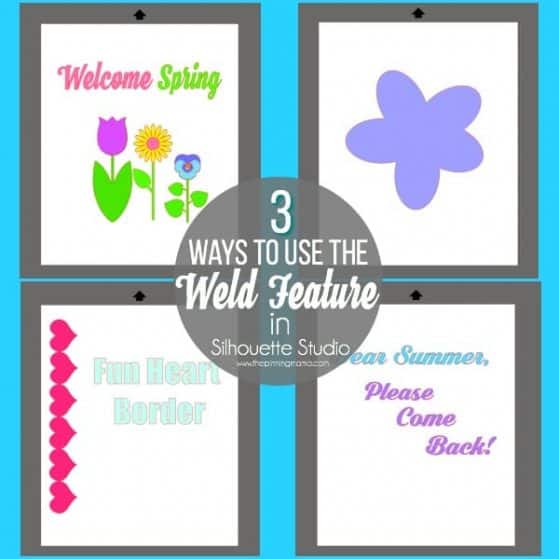